Here is a great resource for evaluating and comparing the myriad of options available in Office 365. This site also provides you with a downloadable Excel workbook so that you can work on this offline.

Yes, that is not a typo. Microsoft is offering unlimited storage on OneDrive for Office 365 subscribers.

This news was released via their blog here – https://blog.onedrive.com/office-365-onedrive-unlimited-storage/

“Today, storage limits just became a thing of the past with Office 365. Moving forward, all Office 365 customers will get unlimited OneDrive storage at no additional cost. We’ve started rolling this out today to Office 365 Home, Personal, and University customers. “

If you want to have a play with the various new preview releases of Windows, here are the links to resources and information on where to download these previews.

If you have a MSDN or Microsoft Azure subscription, you can get them directly via the respective site portals.

Otherwise, here are the public links.

Here is a link to an excellent series of blog posts on how to set up and configure Remote Desktop Services (Terminal Services) in a clear and easy manner. 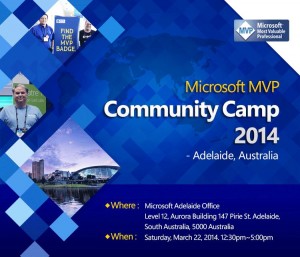 Join me this coming Thursday 20 March 2014 for an online presentation “Virtualization with Hyper-V and Windows Server 2012 R2 Essentials for Small Business.” You can register for the session here – https://msevents.microsoft.com/CUI/EventDetail.aspx?EventID=1032577184&Culture=en-AU

I will be presenting the session in conjunction with the MVP Community Camp 2014, where MVPs from around the Asia Pacific Region will present online and live sessions on a plethora of topics.

Join us on Saturday 22 March 2014, if you are in any major city for live sessions – Especially if you live in Adelaide!

Microsoft have released a bunch of new visual guides to the various features of Windows Server 2012 R2. As per the Microsoft description “These posters provide a visual reference for understanding key Hyper-V technologies in Windows Server 2012 R2. They focus on Generation 2 virtual machines, Hyper-V with virtual hard disk sharing, online virtual hard disk resizing, storage quality-of-service, enhanced session mode, live migration, Hyper-V failover clustering, and upgrading your private cloud. This visual reference is available as a complete wall poster or as individual components that are suitable for printing on most standard printers.”

The link to download these posters is here – http://www.microsoft.com/en-us/download/details.aspx?id=40732

Those with MSDN subscriptions can now download and install Windows Server 2012 R2 as a preview edition and begin to experience the exciting new features as highlighted in my previous blog post – http://blog.powerbiz.net.au/features/windows-server-2012-r2-whats-in-it-for-the-smb/

Microsoft introduced the next generation of their solutions at TechEd North America 2013 today. It was no surprise that much of the offerins were targeted towards large enterprise and cloud computing, as this is where the company is firmly focussed at the present. You can read the official press release here – http://www.microsoft.com/en-us/news/Press/2013/jun13/06-03TechEd13PR.aspx

So, what is in it for the traditional small and micro business? Office 365 currently offers a good alternative to running your own email server on premises after  the Small Business Server line up was discontinued. Wave 15 of Office 365 continues this with infrastructure built upon the Server 2013 family of products. However, Microsoft announced a further release of their server operating system named Windows Server 2012 R2. In this new release, there are a number of features that will be really beneficial to the small and micro business.

Windows Server. A host of new features were announced here. Among the main SMB friendly features are performance improvements, support for dynamic memory and dynamic disks in Linux virtual machines, Drag and drop live migrations, enhanced Remote Desktop experience, and better VM debugging and management. Storage Space has been given an overhaul, and this is a good to to re-evaluate this new technology and see how it can be beneficial to the SMB market. Work Folders encrypts and replicates user data between file servers and devices, and allows for remote wipe of corporate data.

Hyper-V new Features. A whole host of new changes have been incorporated into Windows Sevrer 2012 R2 Hyper-V. First, there is a new VM standard called generation of virtual machines which run only as VMs. They are UEFI based and can only run Windows 8, Windows 2012 or higher operating systems, and do not support legacy devices. VHDx files can now be resized online. USB passthrough is now implemented. Hyper-V Replica has now been extended to allow a target VM to be replicated on to another target  amd there are now choices for the replication intervals.

You can find out about these new developments as they are announced via the live North America TechEd 2013 streaming and videos here – http://channel9.msdn.com/

A little known fact about Windows Server 2012 (WS2012) Standard and Datacentre editions is the fact that you can run these operating systems as a Hyper-V host and use a variety of operating systems as virtual servers. The limitation on the number of virtual machines is governed by licensing. You can install two virtual machines per 1-2 physical processors on a host server if you have WS2012 Standard. If you want 3-4 virtual hosts running on this server, you can purchase another WS2012 Standard license, or you could purchase WS2012 Datacentre, which allows you to install as many virtual servers as your physical machine can handle.

Granted, this is not new for those who have purchased a Volume License agreement. However, not many realise that this is also available in the System Builder or OEM channel.

There is a lot of information on the OEM Partner Center here – http://www.microsoft.com/oem

The big question is “How to I activate the servers?”

To downgrade the virtual servers, you will need to implement the following steps: